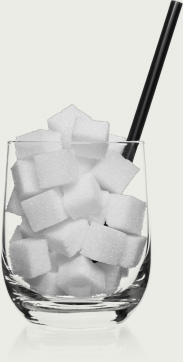 Is sugar poison? The term "poison" may seem extreme, but many mainstream scientists conclude that the sugar habit is dangerous, far beyond its role in tooth decay and obesity. These scientists are convinced that popular forms of "sucrose" are actually causing inflammation and cell damage. Sucrose includes the familiar white crystals of refined sugar, and the high-fructose corn syrup found in thousands of foods and beverages.

The controversy flared last year when an expert on childhood obesity had a lecture posted on YouTube. Called "Sugar: The Bitter Truth," it drew millions of views, and led to major media attention for Dr. Robert Lustig, a leading anti-sugar crusader. His basic argument: sucrose is more than "empty calories," contributing to obesity, diabetes, heart disease and more. All by itself, he maintains, sugar is trouble because of the way that our bodies make use of it.

22 teaspoons of sugar per day! That's about how much sugar the average American eats each day

Before the advent of cupcakes and cola drinks, humans satisfied their taste for sweets with whole foods like fruits, squash and carrots. But these foods also were packed with nutrients and fiber, so the sugar was digested slowly. Today, though, the sugars we eat are refined and liquefied, and our bodies have to deal with lots of sugar that has no place to go.

The result? Dr. Lustig and those who agree with him say that this sugar overload leads to a host of health problems that starts with getting fat - and may end with getting cancer.

One of the issues is the "hidden" sugars in everyday foods. Did you know that sugar is added to everything from breads to salad dressings? No wonder the average American eats as much as 136 pounds of sugar a year - that amounts to about 22 teaspoons of sugar per person, per day.

What sugar means to aging

Excess sugar has a yo-yo effect on the body. At first blood sugar soars, then it drops, and so does energy. The adrenal glands kick in with adrenaline, and that signals the liver to release stored sugars. Then blood sugar soars, and on and on." The body wasn't designed for sugar's massive yo-yo effect," says Dr. Henry Lodge, associate clinical professor at New York's Columbia University. "All it can do in response is to break."

Cutting down on obvious sugar sources is the first move, and reading food labels is the second. Sugar in processed and canned foods is listed in grams, and four grams of sugar equals one teaspoon. The American Heart Association advises normal-weight adults to eat no more than six teaspoons of added sugars daily for women, and nine for men.

Subscribe to our RSS
Information provided here should not be relied on to diagnose, treat, cure or prevent any condition, disease or illness. Please consult with your physician or health care professional for guidance on any health concern. OklahomaCityHealth.com is a commercial website and is not affiliated with any government agency, university, or private medical center. COMPENSATION DISCLOSURE: This site may be compensated for products promoted here. Read our Privacy Policy and Terms of Use.