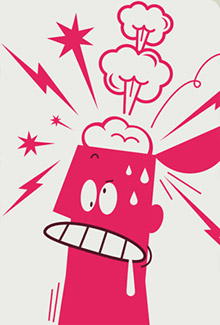 Many people find that exercise can be a natural, free and effective tool for helping manage stress. That's because, in addition its many other health benefits, regular exercise can help us to:
SHOP Amazon's Top 100* Best Selling Vitamins & Nutritional Supplements
+ Free Shipping & Returns on Eligible Items.
(*Amazon's Top 100 list updated hourly.)

How to get started on a stress-busting fitness routine

How to stay motivated

From the Research Desk...

Southampton, United Kingdom - Could inflammation throughout the body contribute to forgetfulness, mental confusion and other symptoms of brain decline? A study published recently in the journal Neurology suggests that this might be the case. 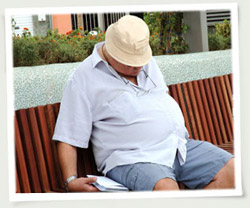 Baltimore, Maryland - Think we are getting fatter?

According to a 2008 Centers of Disease Control and Prevention report, 74% of Americans have a weight problem with 34% merely overweight, 34% obese, and nearly 6% extremely obese.

And the obesity trend has been excelerating.

Back in 1960, those numbers were 31% merely overweight, 13% obese and 1% extremely obese. If we continue gaining weight at our current pace, researchers estimate that by the year 2015, 34% will still be overweight but an additional 41% of Americans will have reached obesity.

A research team at Johns Hopkins University in Baltimore examined 20 studies published in journals and published surveys of weight and behavior. Overweight is defined by the Body Mass Index, a standard medical definition. People with a BMI of 25 or above are considered overweight, while 30 or above are considered obese and at a serious risk of high blood pressure, osteoarthritis, type 2 diabetes, coronary heart disease, stroke, gallbladder disease, sleep apnea and respiratory problems, and some cancers -- especially endometrial, breast and colon. Not only is excess weight a severe health hazard, in 2008, people classified as obese incurred $1,429 more in medical costs, on average, than people of normal weight.

"Obesity is a public health crisis. If we continue to become obese and overweight at our current pace, by 2015, 75% of adults and nearly 24% of U.S. children and adolescents will be overweight or obese," states Dr. Youfa Wang, the study's lead researcher. "Obesity is likely to continue to increase, and if nothing is done, it will soon become the leading preventable cause of death in the United States."

Since we have little control over our genetics or metabolism, here are 5 important lifestyle changes that can help many of us lose weight:

The encouraging news is that even modest weight loss (as little as 5 to 15% of total body weight in an overweight or obese person) reduces the risk factors for many weight-related conditions.

Subscribe to our RSS
Information provided here should not be relied on to diagnose, treat, cure or prevent any condition, disease or illness. Please consult with your physician or health care professional for guidance on any health concern. OklahomaCityHealth.com is a commercial website and is not affiliated with any government agency, university, or private medical center. COMPENSATION DISCLOSURE: This site may be compensated for products promoted here. Read our Privacy Policy and Terms of Use.